“I couldn’t imagine building a quantum computer without this.”

Randomized compiling takes a circuit and randomizes its gates using virtual twirling groups while preserving the overall ideal unitary of the circuit (arXiv:1512.01098). This has the effect of converting coherent and non-Markovian error sources into stochastic errors, resulting in dramatically improved run-time performance and overall stability for quantum algorithms.

More concretely, randomized compiling inserts virtual random gates into a circuit and compiles them as shown in the figure below so that:

These technical features imply the above performance improvements because of the following theoretical considerations. Norm-based quantities that quantify the impact of errors determine (i) the overall success probability with which noisy quantum hardware can execute a quantum algorithm of interest and (ii) the error threshold for fault-tolerance quantum error correction are both bounded by the diamond norm, defined by:

The relationship between randomized benchmarking error rates and the diamond norm is very loose in the presence of coherent errors [4][5] : 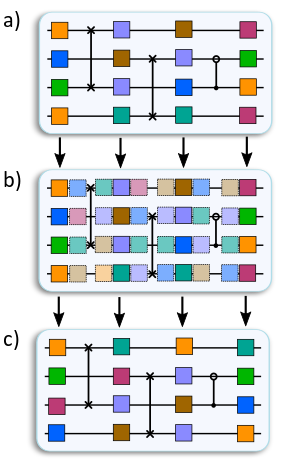 Hard cycles of a bare input circuit (a) are surrounded by random twirling gates (b) that are compiled into existing easy cycles (c).¶