A dictionary-like class which keeps track of measurement results for a single circuit that was run on quantum hardware or a simulator. This is stored as a map from bitstrings to corresponding counts.

Here are some examples:

This class works for ditstrings as well as bitstrings, for \(d<10\). However, for simplicity, this documentation refers to bitstrings throughout.

Dimension can be specified at instantiation, but this dimension will be silently increased if bitstrings with larger numbers get inserted. For example, putting a bitstring of '002' in will mean the dimension will be at least 3, even if it was only 2 previously.

ValueError – If the dim value provided is greater than 9.

Gets the value associated with a given bitstring, if none is found, returns 0.

Bitstrings must match the number of measurements in the Results, this can be checked with n_measurements

Resets all counts to 0, but leaves measurement positions intact. Resets last_modified to None.

The system dimension; 2 for qubits, 3 for qutrits, etc.

The vector representation of the results.

ValueError – If the n_measurements exceeds the MAX_VEC_SYS value, which can be manually adjusted.

The total number of measurements, i.e. the length of each bitstring.

The total number of shots present.

This is useful in the normalization of the results.

Returns a new Results object obtained by normalizing the values of these results to have a sum equal to total, which is 1 by default. By default, the method clips negative values to zero before the normalization.

RuntimeError – If these results have values that sum to zero, which includes the case of no results.

Sorts the keys of the results in-place, either by value or by bitstring.

Returns a new Results object obtained by marginalizing this results object over the specified positions. The order of positions is respected, so this method can also be used to create a copy with reordered bitstrings.

positions (Iterable) – A list of bitstring position indexes to keep in the new results object.

Sets the bitstring counts from a given vector having a length which is a power of the system dimension.

vec (Iterable) – A vector whose length is a power of the system dimension.

Randomly chooses a subset of shots. This is done uniformly and without replacement.

Computes the total variational distance (TVD) between these results and another Results object. Each result object is treated as an empirical probability distribution by dividing each value by the sum of all values. The TVD between two probabality vectors \(p\) and \(q\) is given by

If one or both of these results are assumed to come from a multinomial distribution sampled from some true underlying probabilties (which will in practice usually be the (noisy) measurement probabilities of some final state of a quantum circuit), then the TVD itself is also a random variable. This function reports an estimate of the variance of the TVD, along with the TVD itself described above, as follows.

To estimate the variance of the TVD, for this result object and/or the other result object (whichever are classified as multinomial by the above criteria), n_samples samples are drawn from the posterior distribution

where \(x\) is a vector of result counts, and where the prior distribution in this model is the non-informative improper prior \(\operatorname{Dirichlet}(0)\). The standard deviation returned by this method is the standard deviation of the TVD of these samples with the samples or values of the other results object.

A pair (tvd, std) where tvd is the TVD and std is an estimate of its standard deviation.

ValueError – If the result objects are not compatible with one another, where either the dimension or number of measurements do not match.

Returns a new results object where the outcomes are flipped according to the inverse of the given weyls. That is, we assume the existing results resulted from a circuit where the given weyls were compiled into the circuit before every measurement operator, and this function returns the results as if they were not there.

In the case of qubits, this just means flipping the bit whenever an \(X\) or \(Y\) Pauli was compiled before a measurement. 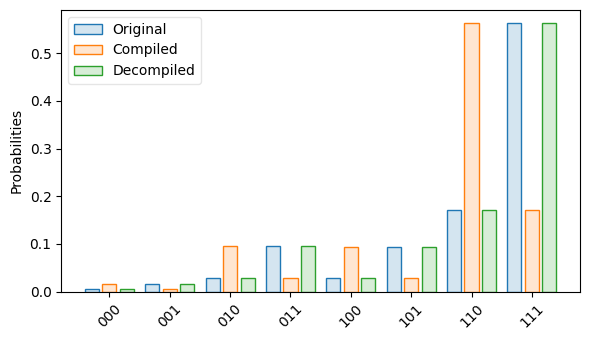 Returns a Results constructed from a dictionary representation.

dic (dict) – A dictionary used to construct a new Results.

Plots a bar graph of these results. See also plot_results() for plotting several Results together, and for additional details. 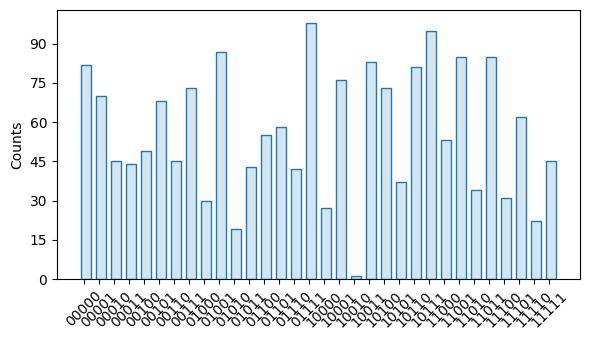