K-body noise reconstruction (KNR) is an error diagnostic protocol that provides a detailed error profile of a cycle of interest. In this example, we will see how to generate and run KNR circuits, and how to interpret the results. First, let’s choose a cycle to benchmark:

This cycle is to be implemented on a quantum processor. For the sake of this example, the device in question will consist of a Simulator. To avoid confusion, we will name it device. Our device will be a minimalistic 3-qubit processor. Now, let’s introduce a stochastic error map to our cycle_of_interest:

Now that the device has been instantiated, let’s try to learn the error profile of the cycle_of_interest. For this, we will generate KNR circuit collections. An important parameter when generating KNR circuits is subsystems. To understand this parameter, let’s first identify the gate suppports of our cycle of interest, which are \((0,1)\) and \((2)\). If subsystems=1, the KNR protocol will yield marginal error probabilities for each gate support in the cycle of interest. 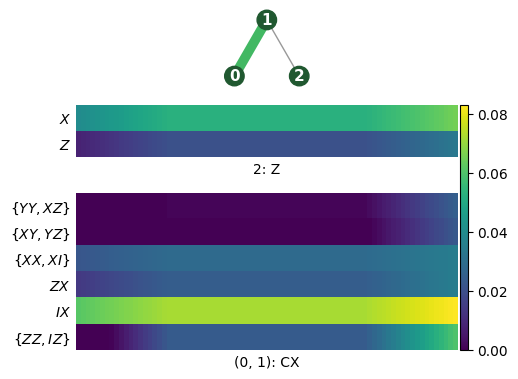 In the plot above, notice that the uncertainty for reconstructed error probabilities is seen in the variation of color in each cell. Some errors that are not included in the underlying error_profile might appear in dark purple due to the uncertainty of the estimates. These dark purple cells can be removed from the plot by simply changing the cutoff options (see the knr_heatmap API reference). Moreover, notice the label \(\{XX,XI\}\), which is associated with a probability of \(3\%\). This bracketed set of errors is short for “\(XX\) or \(XI\)" and indicates that KNR didn’t differentiate between the two and instead outputs the sum of their respective probability of occuring. \(XX\) and \(XI\) are then said to be “degenerate”. Here, we know from our construction that only \(XI\) could occur, but on an actual device where the noise model is unknown, we cannot learn the individual error probabilities in a degenerate set.

Aside from the \(\{XX, XI\}\) degeneracy, we might want to resolve our error profile further. Indeed, from the current experiment (i.e. with subsystems=1), we can’t know if some errors on different gate supports are correlated. For instance, we know that qubit \(2\) sees a \(Z\) error with probability of \(2\%\), and that the qubit pair sees a \(ZX\) error with probability of \(2\%\), but we didn’t learn if these errors occur at the same time or not (we know from our underlying error profile that they are perfectly correlated). To resolve the error correlations between any two gate supports, we can simply choose a KNR circuit collection with subsystems=2: 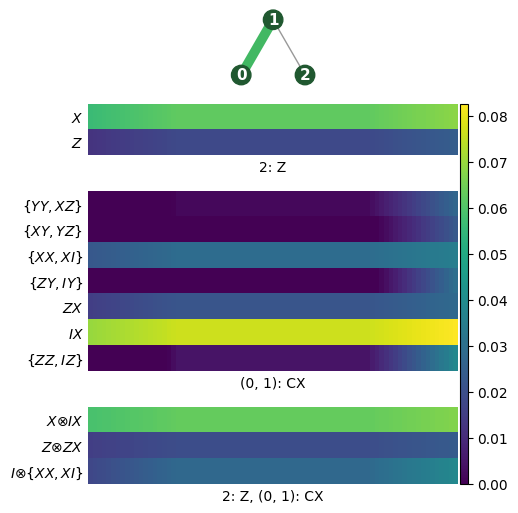 Notice that this experiment yields marginal error probabilities for all pairs of gate supports. Since our cycle only contained a pair of gate supports (namely \((0,1)\) and \(2\)), the above plot shows a complete reconstruction of the error profile.

Specifying which subsystems to probe

To reduce experiment cost, the subsystems argument can be specified as a Subsystems object where subsystems to reconstruct are explicitly defined. In this example, we demonstrate how this approach can allow for a less costly reconstruction by exploiting knowledge of the system being characterized. Consider a linear array of qubits and a cycle of single-qubit gates with underlying \(ZZ\) couplings between adjacent qubits. Rather than reconstructing all combinations of \(2\) operations, we expect distant pairs, e.g. \((0, 4)\), to have no correlated errors and thus omit them.

By using the methods of the Subsystems class, we specified that we only want to reconstruct the errors on adjacent pairs of qubits when calling make_knr(). 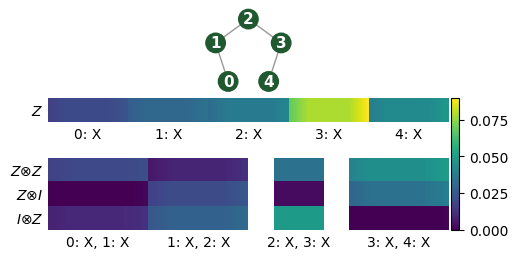 Comparing the above output with a call to make_knr() with subsystems=2, we note that we were able to perform the reconstruction with fewer circuits and omit information about the errors on uncoupled pairs.

KNR seamlessly supports qudits. To see this, let’s recreate a similar example as above, but with qutrit instructions on a 2-qutrit processor:

Now that the device has been instantiated, let’s try to learn the error profile of the cycle_of_interest: 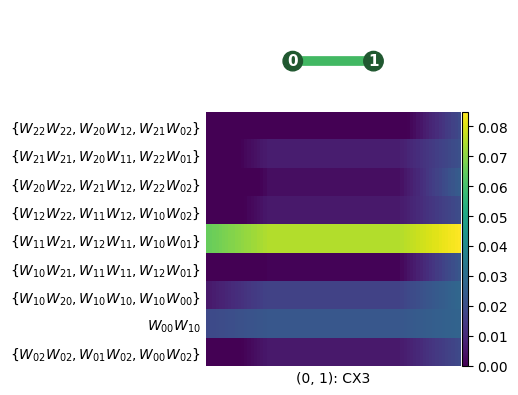 Notice that for this cycle, some degeneracy orbits contain \(3\) Weyl operators. This observation is expected as tq.Gate.cx3 has a cyclicity of \(3\).

For full-system diagnostics, we are often interested in the error that occurs on idling qubits. This can be done by specifying a custom Twirl that includes the labels of the idle qubits.

For example, let’s consider a cycle with a \(CX\) gate on qubits 0 and 1 and an additional, idling qubit with label 2. We instantiate a simulator that adds a stochastic \(Z\) error to the idling qubit and define a twirl on all three qubit labels:

As expected, the resulting error map is dominated by a single-qubit \(Z\) errors on qubit 2, whereas there is no significat error observed on the \(CX\) gate.

One or more estimates with probabilities below the cutoff threshold have been omitted.